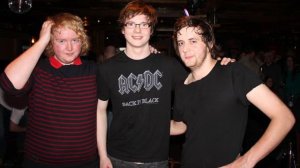 Band name , how did it come about and were you called anything embarrassing before?

Smart. We had originally intended to dress smartly but we never bothered

Who’s all in the band then?

Pictured above left to right, Nick on bass and vox, Johnny on the drums and vox and Graeme on the guitar and vox.

When did you start playing/singing?

What was the first song that you learned?

When Graeme and Johnny started playing they listened to heavy metal so Graeme is influenced by Metallica and Johnny by Avenged Sevenfold. More recently the whole band could agree on being influenced by Kings of Leon, The Script and John Mayer but we all listen to a lot of music and learn from it.

How does the songwriting/song choices come about for your band?

We generally try out any ideas that someone has written, but only the best become real songs.As far as playing covers we try to come up with ideas that will please the audience

What aspect of making music excites you the most right now?

It’s easier than ever to get music out there for anyone to listen to and connect with people via the internet, so it’s generally an exciting time for unsigned artists.

What aspect of making music gets you the most discouraged?

The fact that it’s not what you know in the music industry… it’s more who you know.

As you create more of your own music, do you find yourself getting more or less interested in seeking out and listening to new music made by other people…and why do you think that is?

Through playing in Glasgow we have met many bands and heard some extremely exciting new music and can’t wait to hear more.

We will be playing in King Tut’s Wah Wah Hut on Saturday 17th March. Tickets are £5 from the band. You can get in contact with the band via Facebook We will also recording some new tracks and possibly even making a video for them.

Band name, how did it come about and were you called anything embarrassing before? We were originally called Warsaw without realising Joy div

What was the first song that you learned?

as a band the 1st song was In Denial, the imfamaous internet wonder video recorded in Tommy’s kitchen.

How does the songwriting/song choices come about for your band?

Epiphanies and messages from higher powers.

What aspect of making music excites you the most right now?

What aspect of making music gets you the most discouraged?

Have you seen the charts?.

As you create more of your own music, do you find yourself getting more or less interested in seeking out and listening to new music made by other people…and why do you think that is?

Definitely, as we  are making our own music we can see how much effort is put in. Anyone who makes their own music that is of a good standard should be recognised

We will be announcing things soon on our Facebook Page so stay tuned!

Band name, how did it come about and were you called anything embarrassing before?

the combination of two chinese restaurants! “Fortune of Sorrow” came about by accident after a quick search of Google found that the Plan A name of “Dark Matter” has been used more times than a 12 bar blues.

Who’s all in the band then?

When did you start playing/singing?

FOS have   for a few years   the current line up of   gelled well over the last 12 months. Some of us have a lot of   the others were learning to play music!!The 2 orignal   and   been involved in other bands in the past and Stevie has a wealth of experience and guitar skillsc- while John and Marty bring   and good looks to the band (you should see john with his top aff!!)

What was the first song you learned?
Camy – “Knocking on heavens door”

Tindersticks,  Hootey & the Blowfish, Everything from Green Day, Staind, Jimi Hendrix to Guns n Roses, Pink Floyd and Nirvana.We all have our own favourites which can make songwriting seem like a 10 round bout!

How song writing/song choices come about for your band?

Usually someone has a riff/idea, it gets played. everyone kicks it around a bit, totally changes it, somebody will say “it doesnae work”, then it gets fixed and winds up exactly how it was to begin with! Thank God there are no sharp objects in the practice rooms….

What aspect of making music excites you right now?

We are gearing up to record! We have a few songs that everyone has contributed to so we can’t wait to hit the  studio and have something to show for all our effort!

What aspects of making music gets you the most discouraged?

The notion of promoters and band competitions. Gigging for unsigned bands is hard enough without these obstacles. Minimum  , 70% cut to the promoter and asshole set times and length without so much as a beer to say thanks or a poster that has your band name on it anywhere is beyond the pale a wee bit…. and we’re sure we are not the only ones who feel this way!

As you create more music, do you find yourself getting more or less interested in seeking out and listening to new music made by other people… and why do you think that is?

Absolutely, we have shared gigs with some awesome talent that are just as hard-working as we are! We appreciate new ideas although we do have our own sound as a band – and the sound evolves through time . Hearing new, raw, powerful music helps to shape that. We badly need to bring back rock music back from the brink and bury this Hip-Hop X-F****** ******* once and for all!!

Would you like to plug your next venture? FOS next gig is @ Nice ‘n’ Sleazy, Sauchiehall St. Glasgow on Saturday 25th April… tickets £3. contact the guys @    facebook

now to hear some music from the band go HERE